Before And After VFX and Color Grading

This is a comparison of Trickster Before and After VFX and Color Grading.

some important things to notice:

1. Color Grading: we had to make it look like the post-apocalyptic world of matrix, outside the virtual world where the sky was scorched, we recorded in daylight so we had to make it look more like night  or late-afternoon with clouded sky.  The original matrix series made it look more bluish, i didn't make it that much though. the greenish look that matrix have is only used inside the virtual world, but trickster happens only outside of it, where the look is more gray and bluish. We used some masks to keep the color of the actress hair and skin, also we made some masks to darken some bright areas or lighten some dark areas, for example in the interior scenes where the outside was too bright and the shadows areas were too dark.

2. CG Sentinel, Rifle, Aircraft integration: Some pftrack for tracking the camera and the rifle dummy. After rendering we had to match carefully the colors with the real footage. The rifle was difficult sometimes because i had to erase some pieces from the real dummy in the footage. In the shot where the actress is raising the rifle to aim the sentinel i had to reconstruct a piece from her face that was blocked by the dummy but not by the CG weapon. In other parts i just blacked out the dummy and it worked like a charm (lazy but effective). The rifle dummy had a little piece of plastic strip hanging around that i forgot to chop off and it was a pain in the ass to erase it in post, watching the short again i noticed that i forgot to erase it in some parts (oops!). And the guy that you see around there in some shots is me acting like a fool sentinel ;), it's better to have some physical reference for the actress to look at. And what about the sentinel?, oh my goodness! tons of work animating those damn tentacles.

3. There was a lot of vegetation in the location, we had to erase it in post (it doesn't seem to be too much vegetation in a post-apocalyptic-scorched-sky Matrix world). The smallest ones were just desaturated and the bigger ones were blocked by some CG wall or CG terrain.

4. Sky Replacement: the clouded sky was a huge HDR image that i bought on the net, i used the a 3D scene with a tracked camera to place the sky in almost all the shots, then in compositing i masked it out using the real almost-white sky as chroma-key with the help of some rotoscoped masks, taking out some trees in the background as well.

5. Some shots were just photographs, in some of them i added some camera movement in post to make it look less static and/or more dramatic. The shot in the sky where the sentinel is flying towards the camera is a photograph too, i added the camera movement making a projection over a 3d environment and animating the 3D camera.

6. One of the most difficult shot was the second one, where the Actress is walking away from the aircraft in flames. We didn't have a green chroma key background so it was tons of work of rotoscoping and it has to look perfect (we could have saved several days of work by just bringing one at the shooting day :'( ). Some CG terrain was used to cover the vegetation, in the foreground there is a destroyed wall but i didn't rotoscope it, i just deleted it completely and replaced it with a CG version of it, so it was easier to put the aircraft behind. The fire from the Aircraft is a recorded footage of real fire.

Well it was a lot of work doing it at free times at nights, early mornings and weekends but tons of fun as well ;).
Posted by Felix Joleanes

Trickster is now online on Vimeo, to watch it click in the following link:

The project was born in 2013 when Antonio, a friend of mine, suggested to make a video with a Sentinel 3D model that i made some time ago for fun. I was hooked since the beginning with the idea, i wrote a small synopsis and then a 3 page script, the project started to grow more than i expected. At the beginning we only thought of making a small visual effects integration video and then we ended up with a 3 minute live action short film.

This project was made in Colombia, and it was shot near Bogotá using a GH3 Camera and some Rokinon Lenses.

The previous Monday the music for Trickster was orchestrated by the talented team of musicians of the Orquesta Sinfónica Nacional de Colombia and Directed by Alejandro Ramirez Rojas. We're really impressed by their job, and very glad that they were able to work on this project.

And here are some pics of that day: 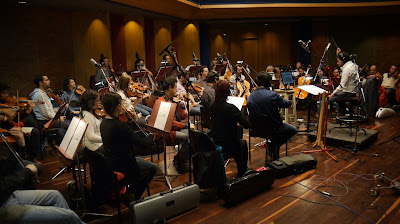 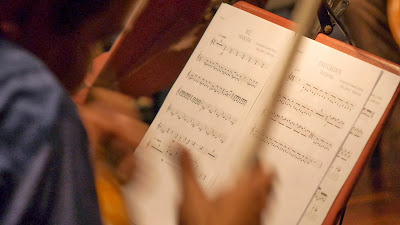 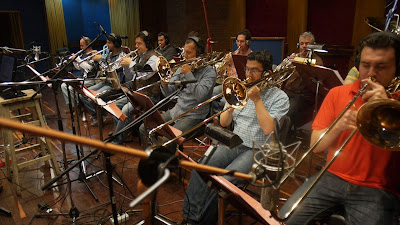 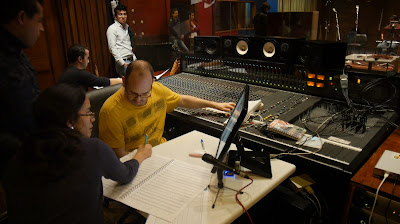 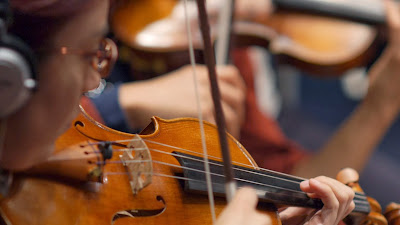 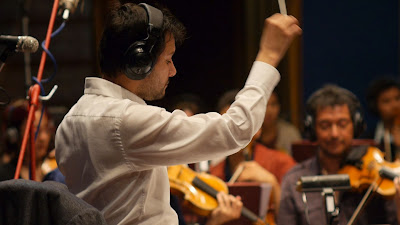 In the final stage - Rendering

With the big help of William Rodriguez from 8088.net we have been able to render all the shots in 4 days, there where 9 High Performance Xeon Machines conected with backburner. In average each frame rendering time was about 30 minutes, there were some taking up 3 hours. 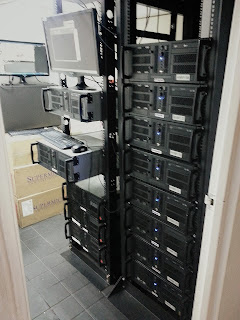 This is a render of one of the shots, it was done using vray, rendered with several Elements and stored in exr sequences to composite later in Nuke. 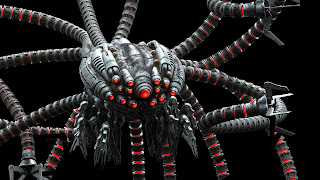 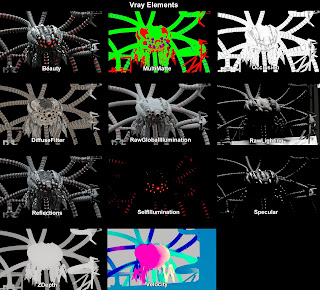 More progress with the aircraft, i have used the same technique that was used with the sentinel and the Rifle.
Using several metal, dirt and rust textures, mixing them with cavity and occlusion maps. Again vray was used for the render. 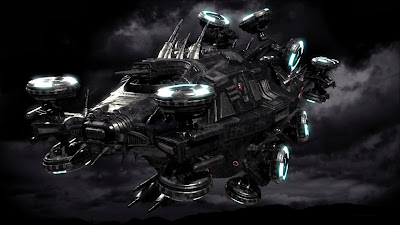 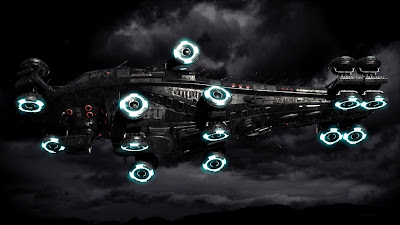 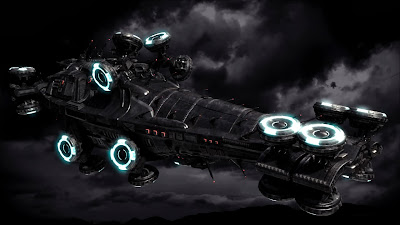 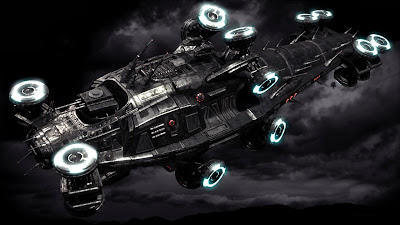 Thanks!.
Posted by Felix Joleanes

Hi, Esteban is almost done with the model of the aircraft, a lot of work has been done adding details and general polishing.

Here there are some stills of the ship. some other details will be added later, it has no textures yet. 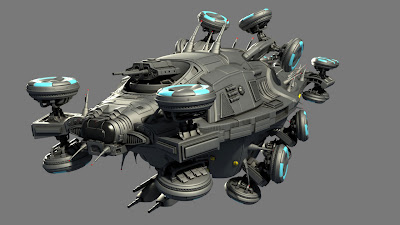 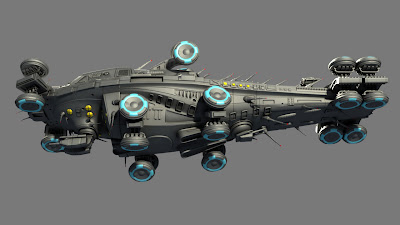 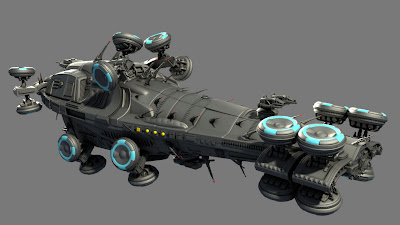 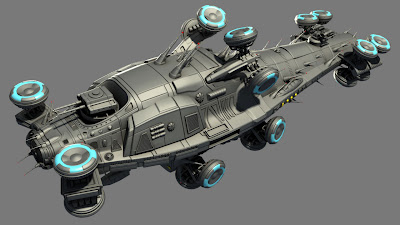 Directed and Produced by:

Trickster is a non-profit fan film for private use only, and is not for sale or resale. It is strictly for the promotional use of our crew. It is in NO way endorsed by Warner Brothers nor is it intended to undermine or compete with any existing or forthcoming material. Trickster is created for fun and should not be sold, rented or used for anything of the sort. We make no claim to any of the characters, locations, storyline, props, costume designs, logos, names or situations that are trademarked, copyrighted or otherwise protected by the federal, state, international or other intellectual property law. This film is produced solely for the personal enjoyment of ourselves and any other Matrix fans. No copyright infringement is intended or implied.